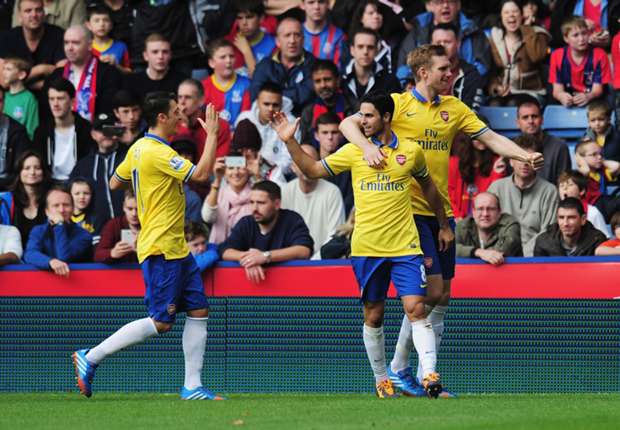 COMMENTBy Greg StobartA quarter of the way through the Premier League season, Arsenal are sitting at the top of the table in what is already appearing to become the most competitive campaign in recent history.At least six teams - and maybe more - will feel they have a legitimate chance of winning the title this term and each side has produced plenty of ‘for and against’ arguments for their credentials.Arsenal have without doubt been the most impressive of the contenders in the opening nine games, largely thanks to a kind fixture list in which a home game against Tottenham represented their only significant test. The Gunners are the form team, winning seven games and playing with defensive stability and attacking cohesiveness built around Olivier Giroud and Mesut Ozil, whose deadline day arrival was the catalyst for their storming start.November, however, promises to be a true test for Arsene Wenger’s side. They face Liverpool, Manchester United and surprise package Southampton in their next three league games, with a crucial Champions League to Borussia Dortmund sandwiched in between.Arsenal can only beat what’s put in front of them but Wenger knows full well that their technical and mental capacity to challenge for the league next May could be determined by how they come through the next few weeks.“It is people who do not believe that we have a chance, but the only thing we can do is win our games,” Wenger said over the weekend.“The only thing which is important is every win makes you a bit stronger and strengthens the belief.“We have difficult games coming up, and that will be a good test, but I am confident.”Wenger, like the Arsenal fans, will sense a huge opportunity to end the club’s nine-year trophy drought if they can keep their heads and maintain their fine form.Other teams will feel the same, though. Even Manchester United, who sit eighth having made their worst start in 24 years, are only eight points off the pace.David Moyes would probably accept a top four finish in this stage of a transitional season and the Scot could reasonably point to a tough fixture list, quite the opposite of the relatively easy start for Arsenal.
Manchester City have produced some impressive displays but thrown away points with unforgivable mistakes on the road against Cardiff, Aston Villa and Chelsea. Manuel Pellegrini needs to sort out the teething problems at the back sooner rather than later if City are to win back the title in his first season in charge.Chelsea were pre-season favourites for many and Jose Mourinho’s men are sitting dangerously, two points behind Arsenal having played away at United and Tottenham and beaten City at home.With Fernando Torres finally showing signs of returning to the form that convinced the Londoners to pay £50m for his services, the major gap in the Chelsea squad could be plugged, at least until Roman Abramovich opens his cheque book again in January.Liverpool have the league’s in-form strikeforce in Luis Suarez and Daniel Sturridge, while Brendan Rodgers’ side appear to be benefitting from the absence of European football this season, enabling them to focus on the league campaign.Tottenham have yet to produce the performances expected from the £100m summer spending spree but are still fourth in the table, just three points off Arsenal, and have found the knack of grinding out results from poor displays.It sets up an open, unpredictable title race. All of the challengers have their merits, but also their faults.Arsenal will consider themselves favourites given they sit pretty at the top of the Premier League table, but two months ago, before Ozil’s arrival, the febrile atmosphere at the Emirates Stadium bordered on revolution.The Gunners are a team defined by momentum - whether that’s positive of negative. One bad result can, traditionally, trigger a poor run of form in a squad that lacks the proven winning credentials of Wenger’s squads of old.How they come through November will be a decisive barometer - and Jose Mourinho et al will be watching with interest.Either way, it promises to be the the most competitive, unpredictable title race in the Premier League era.
Source: http://www.goal.com/en/
Tags:
Share