﻿
Timeline
Martino and Neymar leave Ancelotti in the shade
0 comments
Posted on 28 October 2013 04:55 by mr. Giglang 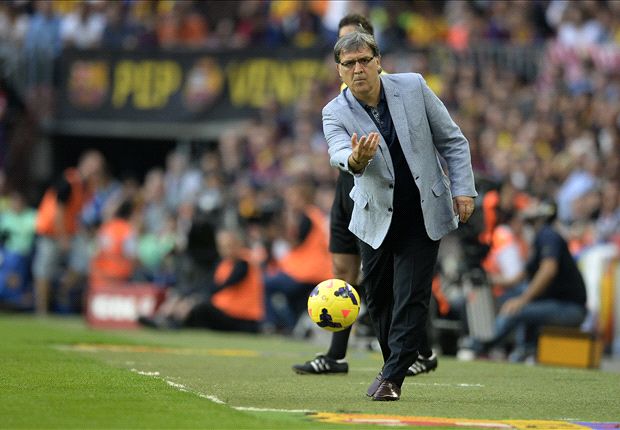 COMMENTBy Peter StauntonNeymar deservedly takes the plaudits. He is drinking in his status as Clasico hero after a goal and assist helped Barcelona beat Real Madrid at Camp Nou. The Brazilian shone on the night and was given a crucial platform to succeed by his coach Tata Martino. A significant tactical tweak, one which was neither anticipated nor solved by Carlo Ancelotti, handed Barcelona the impetus to move two wins clear of their arch-rivals in the Liga title race and left the Italian with an army of sceptics to convince. "We tried to swap [Lionel] Messi and Neymar's positions to find more space away from a saturated area," said Tata in the aftermath of the 2-1 win.Pep Guardiola had the idea to field Lionel Messi as centre forward instead of a right-sided attacker ahead of a Clasico at the Bernabeu in May 2009. The reason being that Barcelona, with Messi stationed centrally, could exploit whatever gaps appeared between Real Madrid's defenders and midfielders. That night, the Catalans won 6-2 and Messi scored twice. He has not been away from that centre-forward position since. Tata, though, went back to the old school on Saturday night. He had hinted at what might come on Tuesday against AC Milan. Once Alexis Sanchez was replaced by Cesc Fabregas, with around 15 minutes left, Messi went wide to the right. Meanwhile, Ancelotti prepared his team for this match with Messi as centre forward in mind. Where Jose Mourinho had used Pepe as an insurance policy against the Argentina captain in previous matches, Ancelotti used Sergio Ramos. Not since the 2005-06 season had Ramos been pressed into action in that part of the field.  Martino evaded the tactical landmine sprung by Ancelotti and Ramos was exposed. Messi diligently played from the right and an early booking for his skipper only compounded Ancelotti's folly. Asier Illarramendi was a much better performer in that position once he was introduced. His coach will have been encouraged by the Spaniard's showing but really should have started with him. Illarramendi's poor display against Juventus ultimately counted against him.Real Madrid disappointment this morning will be coloured with a bitter hue due to the penalty they were not awarded. "The same old story. I won't talk more about it," Marcelo spat in the wake of Javier Mascherano's shove on Cristiano Ronaldo. There was, though, more to this match than one call deciding its outcome. Madrid had plenty of the ball; Barcelona have excelled in recent seasons with relentless high pressing but on Saturday they were content to let Real Madrid come onto them. Not until injury-time did Barcelona lose their strategic concentration and were caught upfield. Messi gave the ball away, Ronaldo squared it for Jese who scored. Had Barca pressed high all night, they would have been caught out more. But Tata drilled them well. And so where it worked for Tata it fell down for Ancelotti. Even his substitutions were golden; Alexis Sanchez brilliantly chipped home the second goal as Catalunya rose in unison.The man recruited from Paris Saint-Germain believes that Gareth Bale can thrive as a centre forward but his expectations for that went up in smoke at Camp Nou. Bale was not responsible enough in possession and gave Barcelona, too often, the chance to pick his pocket and move on. As Clasico debuts go, this one is to be kept in the archive marked 'disaster'. Bale's selection had more to do with the opposition than what he could offer his own side. "I asked him to play there to put more pressure on Busquets," said Ancelotti afterwards. Even so, the Spain international completed 50 of 52 attempted passes without impediment. Ancelotti was not afraid to make changes in his team's other big league match this season. Real Madrid were second-best in the first half against Atletico and the Italian was decisive. Off went Angel di Maria and Illarramendi for Luka Modric and Bale. He should have been thinking along similar lines on Saturday. It is hard to comprehend what Ancelotti saw in the first half from the Wales international that made him believe he would be the matchwinner. All the while, on the bench, sat Isco. Granted, he misses too many cues to track back. But Real Madrid's policy on the night rarely surpassed one of containment and Isco could have helped them carry a more meaningful threat.Los Blancos lack imagination in the final third without him. President Florentino Perez and Ancelotti are still facing questions over the decision to sanction the €100 million purchase of Bale and sell Bernabeu darling Mesut Ozil to Arsenal. The coach preferred to keep Di Maria at the expense of the German. These are tough days for Ancelotti. A good result masked a bad performance in the Champions League in midweek. The former Chelsea coach has failed his two big tests in La Liga and is no closer to solving the conundrums involving individual players that concerned him at the start of the season - Bale and Karim Benzema in particular. The Real Madrid objective of winning the league looks more remote than ever; they are six points adrift of Barcelona - a gap that can effectively be light years in Liga terms. Yet they will top their group in Europe. So long as Real Madrid remain in the shake-up for the Champions League title and that highly-prized Decima, he will be retained. But he will not have goodwill from the league season to fall back on if that chance escapes them.
Source: http://www.goal.com/en/
Tags:
Share