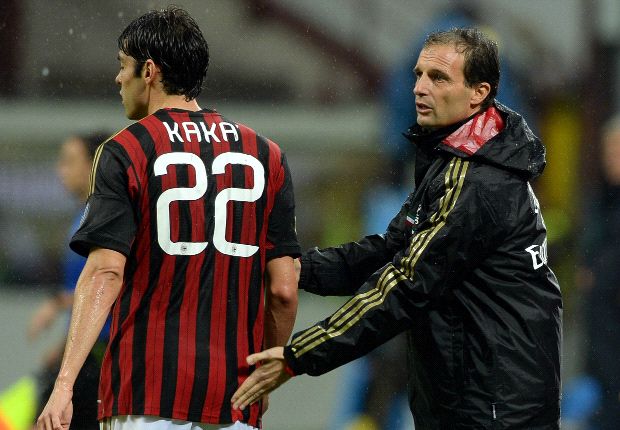 AC Milan boss Massimiliano Allegri has said Kaka is on a mission to prove he's "still a champion" since returning to San Siro in September.The former Real Madrid ace netted his first goal in his second spell for the club in the 1-1 stalemate with Lazio on Wednesday, exquisitely curling beyond goalkeeper Federico Marchetti from the edge of the area on 54 minutes.Defender Michael Ciani levelled matters 18 minutes later but, despite the result, Allegri sung the praises of the Brazilian midfielder, whom he claims is a paradigm for the younger generation of Rossoneri stars."Kaka achieved great things with Milan and he wants to prove he’s still a champion," the coach told Sky Sport Italia."He’s a humble guy and knows technique is not enough to stay at the top level, so he sets the example for younger players."As well as bringing a champion back to Italy, Milan have brought in an example in how to train and be a professional football player."Striker Mario Balotelli had come in for some criticism from Allegri in the 3-2 defeat to Parma on Sunday, describing his performance as "poor", but the 46-year-old could find no fault with the forward's efforts on Wednesday."Balotelli had a good game," he added. "He worked hard and attacked the space, which was not easy against Lazio. I am happy with his performance."Kaka, who quit the Italian giants for Real Madrid in 2009, endured an indifferent four-year spell in the Spanish capital, before re-signing for Milan on a free transfer in September.
Source: http://www.goal.com/en/
Tags:
Share