The summer signing looked lost in the Clasico defeat to Barcelona, but was back to his brilliant best with a double and two assists in Wednesday's win 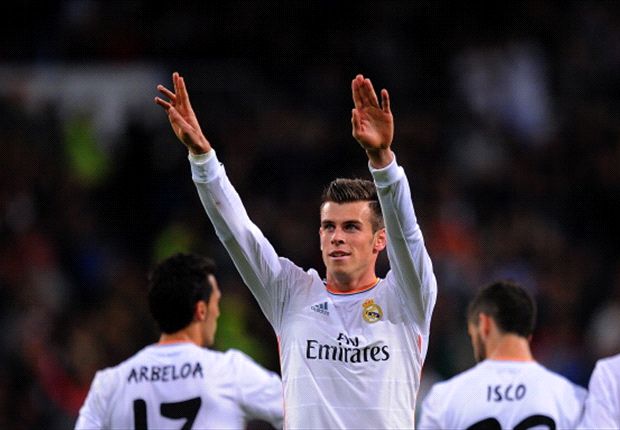 COMMENTBy Ben Hayward | Spanish Football WriterReal Madrid fans were left wondering what might have been. Gareth Bale finally showed his considerable quality with an early double and two assists in the Blancos' sensational 7-3 win at home to Sevilla on Wednesday. It was a remarkable response to his doubters and critics - albeit four days too late.Bale was a surprise starter for Madrid in the Clasico on Saturday, but looked lost at Camp Nou and hardly touched the ball early on in the game. One forward run and a powerful effort fizzed over the bar were his only meaningful contributions in the end as the Welshman went missing for long spells.Criticism was harsh and forthcoming. Signed for a world-record €100 million from Tottenham in the summer, Bale had much to live up to and, although still short of full fitness, his performance on Saturday proved desperately disappointing. But the 24-year-old was hardly helped in Catalunya by a vague tactical plan which left Madrid's forwards without a clear point of reference in attack or a midfield playmaker. And, in the absence of a creator, Bale was little more than a willing runner. Much more had been expected.Wednesday was different. Carlo Ancelotti recalled Karim Benzema in the role of sole striker and brought back Isco in a central playmaking position, with Cristiano Ronaldo on the left and Bale on the right. Balance, a clear plan and defined roles. And with conditions favourable, the Welshman showed his expectant fans exactly what he can do.Isco and Benzema, both benched in Barcelona, combined to set up Bale for the first after 13 minutes on what was the Welshman's full home debut, as the former Tottenham winger lashed an unstoppable left-footed drive into the top corner from the edge of the box to open the scoring in a quite incredible game.Bale then forced Beto into a decent save and blasted another long-range effort over the bar, before making it 2-0 with a deflected free kick after Ronaldo had handed over the set-piece duties to his troubled team-mate.The Portuguese was only ever going to hit the penalty himself after Isco won a contentious spot kick, but Bale set up Benzema for the Frenchman's first and also assisted Cristiano for the 28-year-old's second. A surging run into the area could also have won a penalty after that, but there appeared no contact and the referee waved play on.All in all, it was a hugely impressive performance. Perhaps a little late, but this is exactly what Madrid signed up for when they bought the 24-year-old for €100m in the summer; Saturday's tepid fail gave way on Wednesday to an epic Bale, and a new star is born at the Bernabeu.
Source: http://www.goal.com/en/
Tags:
Share