﻿
Timeline
Who can stop Roma? The longest winning streaks in history
0 comments
Posted on 31 October 2013 00:14 by mr. Giglang

Roma can make it 10 victories from 10 against Chievo on Thursday - a Serie A record start - and, with this in mind, Goal takes a look at the top domestic winning runs in Europe 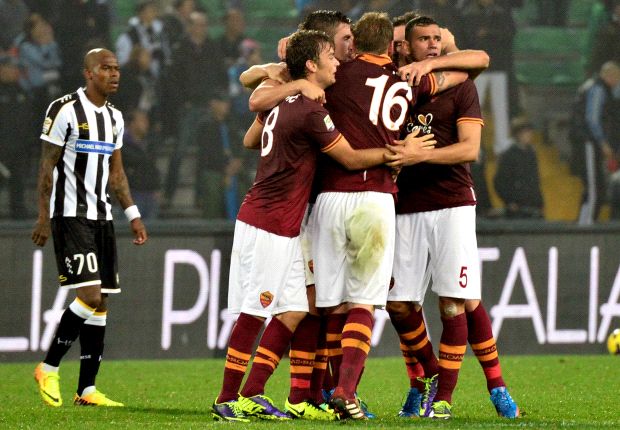 COMMENTBy Craig TurnbullOn the surface, Michael Bradley's winner for Roma eight minutes from time against Udinese last weekend may not seem that important, or indeed that impressive, but delve deeper and it begins to tell a tale about the Giallorossi's blistering start to the campaign.Down to 10 men following Maicon's dismissal and away in Udine, which had become a fortress for theZebrette, Bradley's composed finish continued the capital-based club's unblemished record. Nine wins from nine games, 23 goals scored and only one conceded are stats that Roma supporters could barely have envisaged following the sale of a host of star players such as Pablo Osvaldo, Erik Lamela and Marquinhos; with the club also still recovering from an underwhelming sixth-placed finish in Serie A and Coppa Italia disappointment against rivals Lazio in May.Rudi Garcia was appointed coach following Aurelio Andreazzoli's temporary stint in charge. Garcia's reputation may not have had fans eagerly anticipating what lay ahead, but in only a few months he has transformed the club's fortunes, instilling a spirit and confidence within the side.It is perhaps no surprise, too, that Roma's resurgence is in sync with their captain and all-time leading goalscorer Francesco Totti. The 37-year-old has rolled back the years with impressive displays, so much so that there have been calls for him to be reinstated in the Italy team. Former Arsenal attacker Gervinho has answered his critics rekindling the type of performances for Roma that lured Arsene Wenger into initially signing him for the Gunners. The defence has also been strengthened by Mehdi Benatia's inclusion, while Kevin Strootman has fitted in seamlessly from PSV alongside Daniele De Rossi in midfield.Only Juventus under Fabio Capello in 2005-06 can claim to equal a start as impressive as this, and on Thursday Roma can hold the record on their own by beating bottom side Chievo. And, while Garcia's men will not be looking too far ahead of themselves, a run of fixtures against the Flying Donkeys, Torino, Sassuolo, Cagliari and Atalanta could well put the Serie A record of 17 consecutive games won, which is held by Inter, under threat.However, some records across Europe's domestic leagues remain quite secure. For instance, Benfica's 29-game winning sequence back in the '70s - led by the supremely talented Eusebio - has not been beaten in over 40 years, though, Croatian side Dinamo Zagreb, blessed with talent such as Eduardo and Luka Modric, came extremely close to dethroning the Eagles in 2007, with their coach Branko Ivankovic claiming they would beat the Portuguese record right before they suffered a 4-3 defeat to Varteks.Elsewhere, Celtic hold the British record for consecutive victories, sweeping all before them under Martin O'Neill's tenure back in 2003-04. The Hoops posted 25 straight wins in the Scottish Premier League and fired in a record 105 goals, with Henrik Larsson signing off with 30 of them before he joined Barcelona.The Catalans themselves hold the Spanish milestone with a 16-game winning sequence back in 2011. Lionel Messi fired a hat-trick in a 3-0 victory over Atletico Madrid that ended Real Madrid's 15-game winning record, led by the legendary Alfredo Di Stefano, set back in 1960-61.In England, Arsenal won 14 straight games in the Premiership (now Premier League) in 2002, while in Germany, last year's treble winners Bayern Munich recorded 15 straight wins in 2005 which were split over 2004-05 and 2005-06 campaign. Seventeen consecutive wins, 14 of them in the 1988-89 season, and 130 goals were not enough for Dinamo Bucharest to clinch the Romanian title as rivals Steaua Bucharest, who also recorded a winning sequence of 17 games over two campaigns, edged them out by three points. It may be premature to start talking about Roma's chances of emulating records such as these, but theGiallorossi have already proved themselves against difficult opposition including comfortable victories over Inter and Napoli, and a kind run of fixtures could well see them putting more pressure on the Nerazzurri's record.
Source: http://www.goal.com/en/
Tags:
Share